Marley the blacknose sheep that thinks he’s a dog

When deciding between a ride on lawnmower or a sheep to keep the grass short, it’s no surprise that Ali Vaughn went for the animal option. ‘Since childhood I’ve had a menagerie of animals including chipmunks, chinchillas and a leopard gecko. You name it, I’ve had it, but my latest pet didn’t quite turn out as expected,’ Alison cheerfully admits. ‘Recently, when we moved onto our smallholding with three acres of land, I decided to get a sheep to eat the grass.’

Ali who lives at Rickerby, near Carlisle says: ‘I found Marley, a Valais Blacknose, on Facebook. He was dinky, very cute and looking for five-star home. I was lucky to get him.’ Ali’s children, ten-year- old Ella and four-year-old Max, immediately loved him and, along with her husband Adam, the family all learned to bottle feed him. 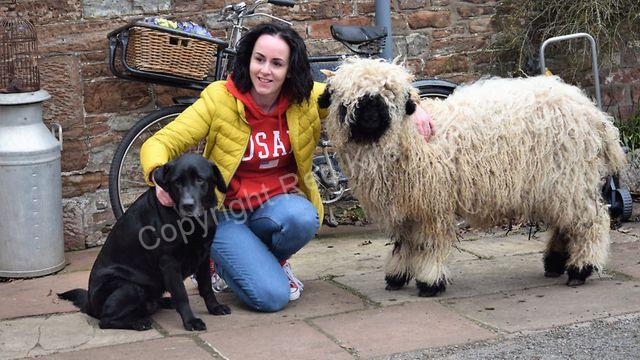 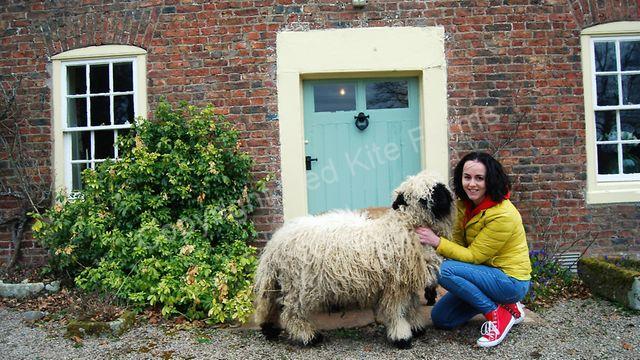 ‘The tiny lamb soon grew to trust the children and would jump around the kitchen with young Max. We’re all animal mad, which is just as well. In fact, on our wedding day my father warned Adam that he would be taking on not only me but all my animals too!’

Marley also happily took to Jess, Ali’s 10-year old Labrador and when he became ill two weeks later, it was Jess who he turned to for comfort. ‘Marley had developed a serious joint condition, common in lambs, and was very poorly. He went straight to Jess’s bed in front of the Aga and they cuddled up together. Jess is a very good-natured, maternal dog and is used to cats and ducks. Last Easter she shared her bed with newly incubated ducks who would snuggle up to her.

‘It took three weeks of daily visits to the vets for daily injections before Marley fully recovered but by that time we had realised that he had begun to mimic the dog’s behaviour.

He would eat at the same time as Jess and share her water bowl. We had taught Jess to give us her paw for a treat and it wasn’t long before we realised that Marley was lifting his hoof to us. He would bound around and do laps round the garden with Jess in the lead, chasing toys and skipping along. And it wasn’t long before he was going for walks with us. 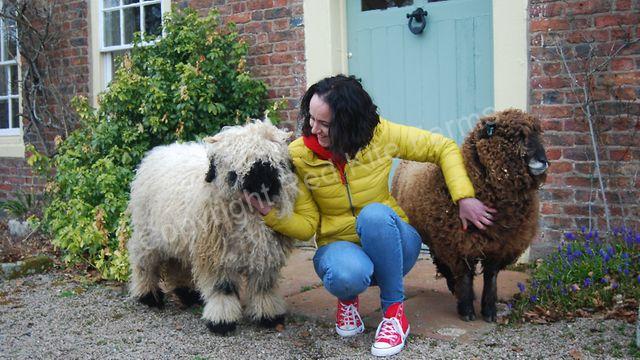 ‘Every day we would take Jess up the lane and Marley began to tag along. If we left him behind he would baa to let us know that he wanted to come with us. I knew that walking would help to strengthen his muscles and joints, so it became part of our daily routine.’

Meanwhile the grass kept growing and Marley, still bottle fed, was showing little interest in eating it. ‘I knew that, for his own good, he had to learn to be a sheep again and not a dog so I decided to get another sheep to keep him company. I went back to the same farmer who was full of helpful advice and bought a brown Ryeland sheep that we named Bear’.

Destined for the freezer, Bear had a lucky escape and immediately settled in with Marley. The Ryeland breed are known for their placid nature so he fitted in well and the two sheep were soon cropping the grass and, on occasions, the flowers in the garden. ‘They often graze with their faces together. I think there’s a bit of a bromance going on,’ laughs Ali.

‘They’ve become pets but live outside and have a cosy straw-filled bed in the old piggery when needed,’ explains Ali who also has two cats, 20 ducks and a bouncy young golden Labrador pup called Teddy. ‘Bear tolerates Teddy and puts him in his place but Marley loves him. He’s also obsessed with our grumpy 17-year-old cat – he skips along behind him and tries to wash his face and ears!’

Originally the Valais Blacknose breed came from Switzerland and are well adapted for the cold Alpine weather but, given half a chance, Marley will try to get back into the house.

‘When we first put him outside he would push his nose through the cat flap and baa loudly to be let back in!’

Ali’s 18th century Cumbrian farmhouse is filled with warmth and furnished with an eclectic mix of finds, mostly bought from auctions. She is a talented artist and has created a successful up-cycling business, called Mucky Ducky. Ali also hosts workshops in her home, where clients are often amused by her unusual pets’ antics, but animals still remain her great passion.

‘When I was younger I worked in a pet shop and the minute I got my wages I would spend them on a new pet’. She’s already planning which animals to get next. ‘We’ve been thinking about getting an alpaca and I would love to get a Herdwick,’ she says with a gleam in her eye.

Meanwhile Marley, not yet fully grown despite his impressive size, is happily cavorting around the garden with his best friends, perhaps not yet quite sure whether he really is a sheep or a dog!

Feel free to get in touch...